The August 11 meeting will be back at the Arboretum, 7:00pm. Jason Chan will be with us for the first time as our demonstrator. Jason and his wife Renee are recent members of our club, so it is great to have one of our own as a presenter.

Jason and Renee founded Eastern Leaf in 2004 for bonsai enthusiasts of all levels. They are located in Chino and offer bonsai trees, tools, and supplies. See their website at www.easternleaf.com.

Jason serves on the Board of G.S.B.F. and also served as the editor of Golden Statements magazine. He has been a student of David Nguy for many years. Jason supports the local bonsai community with workshops at his nursery, including several kids’ workshops each year.

The Golden State Bonsai Federation’s 41st convention will be in Sacramento this year, October 24-28. Registration started in July, and you can access information on their website, www.gsbfconvention.org. The convention is always a wonderful opportunity to be totally immersed in bonsai for several days. There are workshops, demonstrations, seminars, critiques, an exhibit, raffle, auction, and a huge vender area.

We all recently experienced a very high-temperature heat wave. In one day the heat rose so high and fast that many of our trees sustained burn damage to foliage. The trees just didn’t have enough time to adjust.

I read an article about the heat event with a specific suggestion for future high-heat days. The author recommended the use of misters to provide a moisture barrier to help plants adjust and survive a rapid rise in heat. Some bonsai references have said having water droplets on foliage would magnify the heat and cause damage. The author of the article I read said this idea was a myth, and that misting would help prevent heat damage.

I have been misting, in addition to regular watering, on the days of 105 degrees + as a precaution. I haven’t had any additional burning so far. I think misting is a good idea.

Frank joined the Navy Reserves, went active duty during the Korean War and trained as a dental technician. Following his discharge from the Navy in 1953 Frank continued to work as a dental tech and pursued his teaching credential. He went on to teach math at Franklin High School in Highland Park for 32 years. His talents for drawing, knowledge of ratios and proportions and his attention to detail are still obvious today in his bonsai trees and displays. While in the service Frank was also a member of the Navy basketball team, a past time he continued until 2015 when he turn 84 yrs old. One of Frank’s mottos is: “Activity is the secret to life”.

In the early 1970’s Frank took classes with Ben Suzuki at ELA College and then began teaching those same classes in 1973. He also taught “the Art of Bonsai” for the LA Board of Education, Adult Division. Today he continues to be active as a demonstrator providing workshops for many area clubs & events. His philosophy for bonsai is that it promotes longevity; working with trees is a form of meditation. A favorite comment of his is: “ you can talk to the trees and they don’t talk back”. 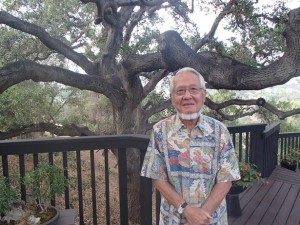 Frank has many varieties of trees in his collection and is well known for his Cork Jade. Since the early 2000’s he has started more than 1000 Cork Jade cuttings to share with our bonsai community. Everyone who has one either got it from Frank directly or from someone else who did. If you do not know the story of the Cork Jade, be sure to ask Frank. It is a fascinating story and will most likely also include a joke or two.

Frank has been a member of SABS since the early 1970’s and has been an active board member for many of those years. Helping new members learn about the art of bonsai is very important to Frank. He encourages all to “ introduce yourselves and ask questions” .

On a personal note, he has been married to Marylin since 1956. His favorite food is ice cream ( the low sugar kind, of course) . We know he also enjoys an occasional chocolate chip cookie.

According to Frank there are 3 stages of life:

For Frank bonsai began as a hobby… the rest is history ! 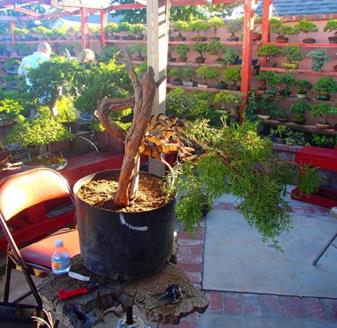 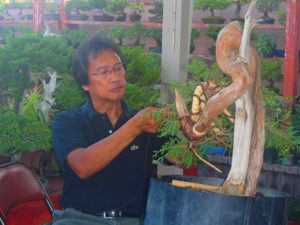 The best part for all of us attending was Peter donating the valuable tree to the raffle. We all appreciate the beauty and value of a well-styled California juniper, and Peter’s tree was exceptional.

In addition to the California juniper, Peter presented the club with a completely wired and styled Japanese black pine he received as a donation from The Orange County Bonsai Society. Thanks go to O.C.B.S. for providing us with a second raffle tree for the meeting.

As in previous years at Peter’s, we had a very full raffle table thanks to his students and our club members. The result was a very profitable night for the club. Thank you to all attending. 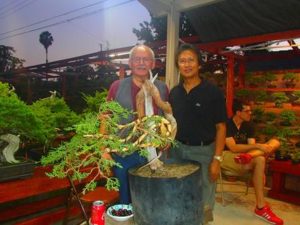 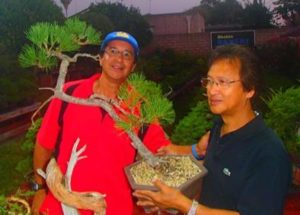 If you have a knack for writing, a story to tell, a photo or something you would like to share in our newsletter please submit it to Lorraine & Dave prior to the 20th of any month at: LMiles6455@gmail.com

Thank You to our July Meeting Raffle Donors:

We were not able a list of all the donors because the table filled up before we could start! Thank you to everyone who supplied items.

You know who you are

No Board Meeting in Aug

Sept — Potluck, bring a favorite dish: a side, salad or dessert

We are hoping to form a new hospitality committee. Anyone interested in helping with the Club Potlucks, meeting refreshments table or the Annual Show kitchen please contact Lorraine for more information. … lots of fun, a little bit of work and first look at all the wonderful treats…..