Frank Goya is returning as our May 14, 2016 demonstrator.  Frank is known as the “dean” of saikei. He is famous for his talent at designing saikei, or living landscapes. Frank was born in California and served in the U. S. Army during World War II after first being interred.  He later worked as a professional gardener and began learning about bonsai and saikei.  One of his saikei plantings is on display at the National Arboretum in Washington D.C.

Frank has been involved with bonsai and saikei for over 50 years.  Come to the May meeting and watch him design a masterpiece. Meeting Time And Place: May 14, 2016 at 7pm LAC Arboretum/ Palm Room

Our 52nd annual Memorial Day weekend show is upon us.  You will find an entry form included in the newsletter, and forms will also be available at the May meeting.  The form includes time slots to volunteer for show set-up, as a docent, and show take-down.  Help is always needed and appreciated. We will not meet in June so that we can support and attend the Descanso Bonsai Society show reception on June 11.  I will remind everyone in the June newsletter. The summer concert schedule at the Arboretum will once again interfere with our meetings in July and September.  Peter and Marissa Macasieb have offered to host our July meeting at their home in West Covina.  We will meet as usual at the Arboretum in August, and then Steve and Judy Anthony will host the September meeting at their home in Covina.  This has become a summer tradition, and we appreciate the hospitality of both the Macasiebs and Anthonys.  Details will be provided in the newsletter as each meeting date approaches. ~Dave

John Nielson joined us again and demonstrated his artistic talents on two small-leaf olive trees.  One tree had multiple trunks and one a single trunk.  Both trees grew in John’s yard for seven years.  He started by recommending not to put a tree in a bonsai pot until the tree trunk had the diameter desired.  A tree grows much slower in a bonsai pot than in a larger nursery pot or the ground. John said you can control the direction of growth in an olive by cutting to a horizontal pair of leaves for canopy width, or to a vertical leaf pair for height.  He prefers using directional pruning rather than wiring except where wiring a branch will fill a void area in the tree.  John talked briefly about leaf size in deciduous trees.  He said you can defoliate a tree to generate smaller leaf size, but the stress on the tree necessitates the tree be healthy.  He cited maple, liquid amber, elm, and cork oaks as examples of trees that can be defoliated successfully. John repotted the single trunk olive into a bonsai pot.  He suggested using aluminum wire to tie a tree into a pot because copper wire corrodes in the soil and can kill roots.  John completed the styling of both trees during the meeting.  Gonzalo Rodriguez was the raffle winner of the single trunk olive, and new member Robert Pachorek won the multi-trunk olive. 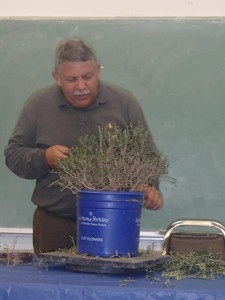 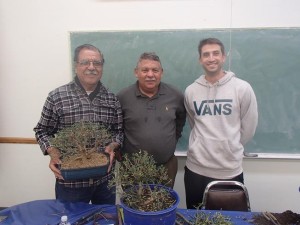 continuing from “The First Years” article by J.L. McNey; During the second Santa Anita Bonsai Society show in 1965, Melba Tucker dominated the first place awards with seven.  During the early years of the club, participants were able to enter up to ten trees with one tree in each class of judging.  By the third year, the show featured approximately 200 trees, and the judged categories increased to 20.  The bonsai shows were a major L.A. County Arboretum event. Look for more next month...