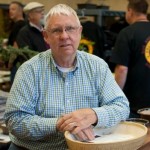 Once again our September meeting will be held away from the Arboretum and hosted by Steve and Judy Anthony at their home in Covina.  Each year it seems our off-sight meetings have grown in both attendance and enjoyment.  The event will be a potluck, so bring a favorite dish or dessert.  The club will supply beverages. Last year Dick Ryerson brought his potter’s wheel and showed us how he makes bonsai pots.  Dick has offered to demonstrate a variation on the use of his potter’s wheel by making an oval pot.  Several years ago Dick worked with his father-in-law to see if they could create a way to use the wheel to make ovals.  At our meeting Dick will show us how he distorts a round pot into an oval.  Dick’s creativity along with the social atmosphere will make for a fun evening. Don’t miss it. 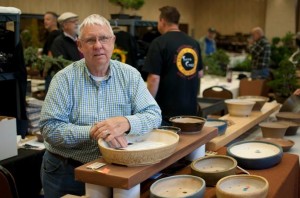 I talked briefly at the August meeting about the upcoming election of officers for the club.  Per our by-laws, our officers can serve up to two consecutive terms of two years for a total of four years.  Our officers are at the ends of their terms, and I am hoping some members will volunteer to participate as officers and board members.  As Ray said at the meeting, the work involved is not difficult.  Board meetings are held before the regular meeting “as needed” to approve club business and plan upcoming events.  For the term beginning in January 2017 we need to fill the president’s position, the vice president/program chair, and secretary.  If you are interested in participating, please give me a call at the number listed in the newsletter. ~Dave

We learned a lot about ficus trees, specifically the narrow-leaf variety from, Ken Fuentes in August.  He brought several trees to show different stages of development. Ken likes to use a sacrificial branch on his material to fatten trunk size quicker. He explained the importance of keeping the sacrificial branch cut back so it doesn’t overpower growth in the main trunk. Ken uses E.B. Stone cactus mix for his trees because it supplies consistently good drainage.  He recommended planting ficus in a shallow pot so roots grow outward and thicken rather than growing downward in a deeper container.  Ken prefers directional pruning instead of wire to shape his trees.  Ficus trees tend to grow quickly, and wire will cut into the branches in a very short time. 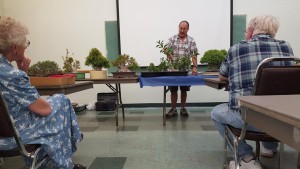 Ken described a technique he uses to minimize scarring after branch cutting. Instead of leaving the round cut scar when a branch is cut off, Ken elongates the round scar up and down in a diamond or oval shape.  Then he cuts deeply into the hardwood in the center of the scar.  He said this elongated scar heals vertically and closes more completely than a round scar. Thanks to Ken for an informative demonstration. 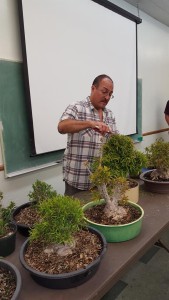 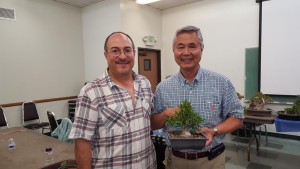 He donated one of his ficus trees to the raffle, and Y.S. Farn had the lucky raffle ticket.

This space is meant for any bonsai related stories or information a member would like to share.  Make your submissions to Dave & Lorraine Miles at dmiles4bonsai@aol.com. Club history continued: In 1968 The Santa Anita show was part of the Spring Flower Art Festival at the Arboretum.  Also in 1968 to fill in the summer break from meetings, a trip was planned to visit the homes of Melba Tucker, Thelma Denslow, and Jim Barrett to see their collections.  Interest in bonsai had reached the stage where the winners in each of the show categories were reported in the newspaper. More next month…

August Meeting Date: Sept 10, 2016 Time: 6:00 PM Location:  At the Home of Steve & Judy Anthony (Access to directions will be sent separately.) No Board Meeting this month