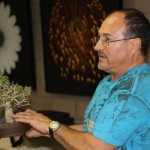 The August 13 meeting at the Arboretum will be an opportunity to learn about the ficus (fig) family of trees.    Ficus trees do very well in our climate, and our guest Ken Fuentes will share a lot of details on the care and training of figs.

Ken has been involved in bonsai for about 40 years and is a founding member of The Conejo Valley Bonsai Society.  Before moving to California, Ken lived in Miami, Florida and was a member of the Bonsai Club of Miami.  He has worked with many bonsai masters including John Naka, Ben Oki, and Warren Hill.  Ken has been a demonstrator, working on ficus trees, at the Bonsai-A-Thon.

The details Ken shares will be applicable to all ficus varieties with some noted variations.  Come prepared to ask questions and learn. 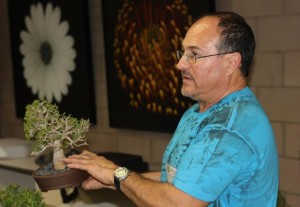 This message is late for most of our members, but it is important to our club history.  Long-time member Bruce Hisayasu passed away June 13.  He and his wife, Yaeko, who survives him, were active in our club for many years.  They were the first club members I met when I joined the club.  I loved that Bruce asked questions of every demonstrator who presented at our meetings.

Bruce sold bonsai pots, and was a prominent source of pots in Southern California.  A lot of local bonsai people have old Japanese pots purchased from Bruce and Yaeko.  They stopped coming to meetings a few years ago when Bruce could no longer drive at night.  We have missed them ever since.  Rest in peace, Bruce.

We enjoyed a pleasant evening outside at our July meeting in the backyard of Peter and Marissa Macasieb.  Our informal gathering away from the Arboretum, due to a summer concert conflict, was an opportunity to keep the flow of our monthly meetings.  We had a large turnout, and members roamed around Peter’s collection, which keeps growing every year.  Peter was available for questions and proudly talked about his trees and how they were acquired.  He has several groups of trees set aside for demonstrations and workshops.  Trees cover every available space throughout Peter’s yard.  Marissa mentioned that she tried to keep the pool deck off limits to bonsai, but it appeared Peter has started encroaching there also. 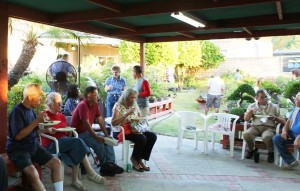 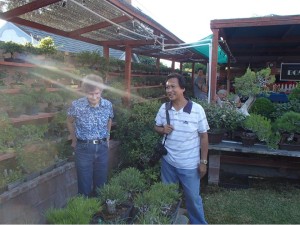 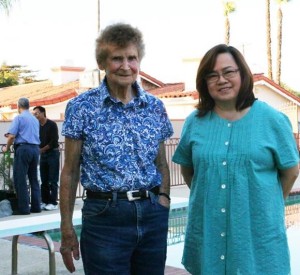 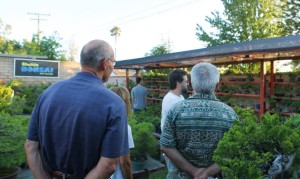 Thanks to Marissa and our members who brought refreshments, there was a lot of food and drink.  The food and socializing made for a great evening. The meeting was a nice alternative to our regular monthly routine,  We greatly appreciate the hospitality of Peter and Marissa.

A Special “thanks” to Peter & Marissa  and to all who brought food & goodies to share at our July meeting.

This space is meant for any bonsai related stories or information a member would like to share.  Make your submissions to Dave & Lorraine Miles at dmiles4bonsai@aol.com.

In September 1966, the Descanso Gardens Guild and Santa Anita Bonsai Society had the first “Autumn Bonsai Festival” at Descanso Gardens.  There were over 100 trees on display and demonstrations for the public.  The following year there were 85 trees displayed by 17 members of SABS.  Jim Barrett’s demonstration had standing-room-only attendance.