Our featured demonstrator for the March 12 meeting will be David Nguy.  He is well known for his work  with California junipers and black pines.  David has studied with Harry Hirao, Ben Oki, and Ernie Kuo.  He also traveled to Japan and studied with Masahiko Kimura.

David is very active in the bonsai community and travels throughout the United States acting as a workshop leader for clubs and conventions.  He belongs to several bonsai clubs here in southern California including the California Bonsai Society, Nampu Kai, Kofu Bonsai Kai to name a few.  His ability to see the future bonsai in a piece of material is remarkable along with his artistic ability to bring his vision to fruition.  Join us in March and take advantage of the opportunity to learn as David works. 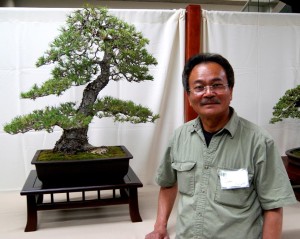 This is normally our repotting time.  However, our winter season seems to have come and gone quickly and many deciduous trees are already leafed-out.  So, we are playing catch-up trying to get our potting done. I hope you had your soil mixes ready and are well along with the repotting  process.

Over the years recommended bonsai soil mixes have gone from a combination of organic and inorganic ingredients to almost 100% inorganic.  This has worked out well for most trees, but I heard an update recently at the Shohin Seminar.

Like all references to soil mix, there are a lot of different opinions, but it helps to hear input from practical experience.  Good luck with your potting.

Roy Nagatoshi gave us a demonstration on approach grafting at the February meeting. He recommended doing approach grafts when trees were dormant, a time when there is less sap movement. Roy said he grafts to improve the foliage of the host tree.  He prefers using kishu shimpaku as his grafting stock to improve the foliage of another juniper species, such as California juniper or San Jose juniper.

Roy went ahead explaining and demonstrating an approach graft even though the warm weather had cut short the dormancy of most trees.  An approach graft combines a living branch from a donor plant with a host tree branch.  The living donor tree is usually a young tree in a small pot that can be set on the soil of the host tree or tied to the host tree.

The demonstration involved Roy grafting a kishu shimpaku branch onto a California juniper.   He explained the importance of using a sharp grafting knife to expose the cambium on both branches to make a perfectly parallel graft.  Once the two branches were mated, Roy clamped them together firmly with wire clamps prepared before starting the graft.  He said it was absolutely imperative the graft connection not move if the graft is to properly “take”.  We all gathered around to watch up close as Roy completed the graft.  Closely watch Roy work made his explanation of the process very understandable.

He successfully completed the grafting, and Marge Blasingame was the lucky raffle winner of Roy’s California  juniper.  Thanks to Roy for a great demonstration.  We also appreciate the fact that Roy donated his demonstration fee back to the club.

The California Shohin Society held its biennial Shohin seminar in February.  A number of our members attended and came home with new shohin  trees from the workshops.  Travelers to Santa Nella included Peter and Marissa Macasieb, Gabriel and Linda Gonzalez, Jerry Banuelos, and Dave Miles.  It is always fun, and the daily hospitality event adds to the enjoyment.  Wine, Saki, and cognac were enthusiastically shared. 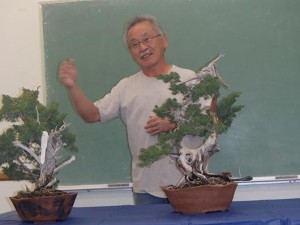 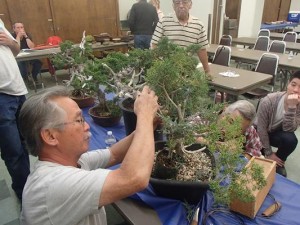 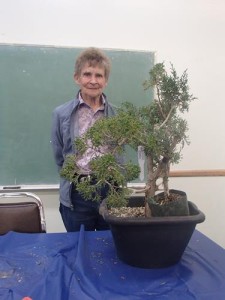 Since the last newsletter,  we learned the actual date of the first Santa Anita Bonsai Society meeting was January, 1964 rather than 1965.  The first show followed in May, 1964.

Khan Komai opened his bonsai nursery in 1958.  In 1961 Khan hosted public bonsai demonstrations and workshops after business hours at the nursery.  People who attended chipped in money for materials used.  The number of people who regularly attended grew until there were too many for the space they had.  A group of attendees met at Melba Tucker’s house in the fall of 1963 to talk about forming a club.  The first official meeting followed in January.

Look for more next month…